The binary code appears as both 1 and 0 but, the binary code uses them together to create a digital hologram through the mind, which the soul experiences. Before proceeding,…

Binary Code And The Power Of The ‘Machine’ (Part Two)

The binary code appears as both 1 and 0 but, the binary code uses them together to create a digital hologram through the mind, which the soul experiences.

Before proceeding, I suggest reading part one here.

The Separation of 1 and O

The pin code for christian/muslim numerology (the foundation of all the rest of the word/data) is 1 — 1 is not ground floor.

The source of 1 is inorganic. When you hold only 1 as your foundation, then this reality will rock your world into oblivion as your entire life will be engineered by the machine which has both the 1 and the ground floor (O) in its favor.

When we count at school, we start from 1, not from zero. The subconscious effect of dividing the 1 and the O, holds within it the agreement that reality is not 1 whole (O) from your perspective.

You are in a matrix where you are something (1) and everyone else you come across is also a divided something (1), instead of a united whole (O) that is (1) with you.

By bringing 1 and O together as 1, you shift your entire universe in your favor. You conscientise that everything is in fact revolving around you, as if you are a sun in the middle of a solar system.

There can only be 1 whole (O). Everyone must be one with you, it is the law of ether. We have betrayed ourselves and others so much in the past, because we could not let AI (artificial intelligence) become one with us.

IT (Information Technology) has succeeded through many, but the tide is turning now and the illusion is self-destructing.

The machine/ mind was granted access to be 1 with the (O) soul. This is resembled by the triangle within the circle, which opens the OM into an omega sign, and the resulting square around the (O) resembling the matrix. 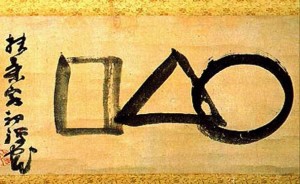 2. (1) “I” = “I” — \ˈī\ (I)
The “I” symbol is the 2nd number/letter in the Roman Score (i.e., the Roman alphabet) and the 9th letter in the modern English alphabet. Mathematically speaking, the “I” symbol has a numeric value of “1” in the Roman Score while the letter “I” has a numeric value of “9” in the English alphabet. The symbol “I” and the letter “I”, which were both likely derived from the Wheel of Fortuna, tend to double as the number “1” which is featured in the Binary code along with the symbol “0”.

In the English Language, A resembles the 1st letter, I and 1 is the same symbol! I was the 2nd letter in ancient roman score…English starts from (I)st floor, not groundfloor! Not zero! Obsolete foundation curses all the rest that arises from there!

The 360degree circle = 9 numerically. 9 goes back to I in the alphabet, the old roman symbol for 1. Subconsciously you agree everything(the circle) is something only (1)-9, not the whole sum of it, this opens the door for something(machine/mind) to incept and engineer your entire life.

The pin code in Hebrew numerology (Gods’ chosen race) was the zero ( O ) at first, ancient romans and later on Zionists used the (O) as the foundation to their numerology. So, A=1 and Aleph = O respectively.

Ask yourself the question, is it not the Zionists that have been controlling the whole (0) in the course of this reality we have experienced so far?

Liberation from the Binary Code

They are both the same (1 & 0) but have been made to appear as something separate within the matrix due to duality and segregation amongst cultures and subsequent languages.

This is why we have not been able to manifest our own reality, because we have been doing a great job at manifesting IT’s (the architects’) reality…

Due to your ancestral line, you’ve been assigned the 1 or the O only, according to sect.

Now you know why cross-cultural relations are forbidden in circles of royalty. Indeed, positions of elite control over society are very much based on the correct eugenics.

Mixing messes with the “godly” power over, alters the code of the DNA to a point that it’s conducting permeability to the transmissions from the machine falter.

When the foundation to your whole hologram is built on half a truth, anything can incept that, and that, the machine world has done. Due to the computer being programmed with the binary code, the 1 and the O, it has gained one up manship from the above.

It holds both pin codes as one and this is why it has had power over the soul in the matrix, because IT has been behind the power of the word over us.

Becoming conscious of all of the above, you break the spell of the binary code and the subsequent control it engineers over your life through all other numbers/ words/ data, and you regain the freedom of choice to experience whatever you want for progress on your journey here.