Circulating sexual energy is a natural cycle we have forgotten a long time ago, and is intrinsically linked to our spiritual development in this world. The hardest part of conserving…

Circulating sexual energy is a natural cycle we have forgotten a long time ago, and is intrinsically linked to our spiritual development in this world.

The hardest part of conserving the sexual energy for any man is the transition phase. It is initially a shock for a body that has been expending sexual fluids externally for its entire lifetime to suddenly stop and reverse the process to the inside rather than the outside.

What must be understood firstly is the fact that orgasm and ejaculation are two separate processes that do not necessarily have to complement each other, and the two can be separated by the mind and especially the PC muscles(the muscles that surround the prostate, the huiyin or perineum).

The healing power of orgasmic energy has its utmost potential when whole body orgasms are experienced.

An ejaculatory orgasm is situated in the genital region only, but when orgasmic energy is drawn up by the mind to higher channels from the genital region, it can be circulated into the microcosmic orbit to reinvigorate other parts of the body.

Before you can even dream of drawing this creative power upwards you need to stop ejaculating, which sends all the power outwards!

Your spirit resides in your Upper Dan Tian (Third eye area), and when it is amply supplied with Qi, it is “raised,” or energized. If the Qi stopped nourishing your brain and spirit, you would lose your mental center, your judgment would become faulty, and you would become depressed and mentally unbalanced. – Dr Yang Jwing Ming, The Root of Chinese Qigong

The microcosmic orbit is the circuit of energy that runs around the body of a balanced healthy individual. The human body is a microcosm of the universe and just like the solar system has a central sun (solar plexus) and an orbit of energy circulating around it, so do we all have this layout playing out within us.

This orbit, which loops up the spine to the head and down the front to the navel, genitals and perineum, is recognized by acupuncturists as the main energy channel in the body linking the various organs, glands, and brain.

It is important for a person to understand the direction and path this circuit flows around the body. Most important of all, it is paramount to determine whether you don’t have any blockages within the two main channels that can prevent the free flow of the energy/ chi/ etheric energy.

There is the conception vessel, starting from the huiyin cavity (midway between the anus and the genital region) which flows from the huiyin up to the navel, chest, up the throat to the tip of the tongue where it links to the Governing Channel. 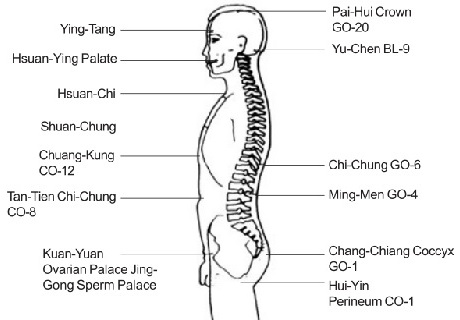 At the back is the governing vessel (or Yang channel) which also starts from the perineum and moves up the tailbone and up the spine to the crown of the head and then down the forehead into the top palate.

The whole circuit becomes one with the help of the tongue (Yin/ Yang linking vessel) that connects the two and allows them to circulate as one. Physically connecting the tongue to the palate is crucial in most Qigong practice.

Chinese Qigong practitioners believe that the Qi must be full and circulate strongly in these two vessels, for then they will be able to govern the entire body’s Qi effectively. They also believe that as a child you continually move the abdomen while breathing, which keeps the path of these two vessels clear. However, as you get older and gradually lose the habit of this abdominal movement, the path becomes obstructed and the Qi circulation weakens. The most significant blockage can occur in the Huiyin cavity (Co-1) – Dr. Yang Jwing Ming, The root of Chinese Qigong

The once secret method to circulate the extra JING energy is from the Huiyin, through the coccyx and up the spine to the top of the crown and back down again down the forehead through the palate and tongue, down the throat, chest, solar plexus and to the navel center where the energy can be stored.

The navel chakra is the storehouse of chi energy and is the primary area where you need to store energy after all inner alchemic exercises involving bio-electric/ chi energy.

Working with bio-electric energy (chi) in your body can be just as dangerous as a fast-food chef doing an electricians job… especially when there is a very high current involved due to the introduction of sexual energy into the orbit, which changes the dynamics and potentials of everything!

There are four channels that need to be clear and unobstructed, these are the Huiyin Co-1, Coccyx or Chang Chiang GO-1, mingmen GO-4, chi-chung GO-6 and Yu-Chen or the cranial pump BL-9 (The cranial pump is the cranial nerves exchanging information with the brain and various parts of the body).

From my experience the practice of yoga is the best way to open up these channels which may well be blocked in most individuals following western modern lifestyles. Esp. the Huiyin.

Try an experiment. Use one finger to press firmly at your Huiyin cavity while your abdomen is moving in and out.

The Huiyin is also known as the magic gate in Qiqong circles, because it is believed that the success and failure in training all depends on grasping the trick of holding up the cavity while doing breathing exercises, which should always be smooth and easy…

When you force and squeeze too tight you cause the chi to stagnate there which causes problems. In Qigong practice one should never use force, Chi flows like water and is lead by the mind like a river. 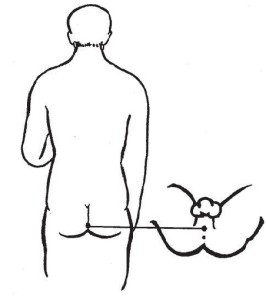 You should by now realize that if you wish to practice sexual kungfu that you need to make sure your body would be able to circulate the sexual energy otherwise you will experience problems.

Some of these might include prostate problems, back ache, head ache or nocturnal emissions (wet dreams) – This is just the natural way for the body to relieve itself of too much Jing centered in one area due to the inability to be circulated.

The above mentioned channels of figure 1 are concerned only with getting the Jing Chi up to the brain which is only halfway around the microcosmic orbit.

From the crown of the head the extra Jing Chi needs to be circulated down the Yin channel (front side) of the body.

You do not want an overload of energy to stick around in your head as your brain overheats easily and again this entails its own side-effects which may include irritability, anxiousness, headache, hallucinations, overthinking and unwelcome feelings and emotions.

One should always make sure that one is in a good emotional space before arousing the coiled serpent, as sexual energy is well known for increasing the feelings in the psyche exponentially  of that which is already present.

In the third article of this series you can learn more on further information relating to the circulation of Jing and techniques to draw orgasmic energy upwards.