We’ve known that our lives are but a fleeting expression of the Infinite, but there are few instances in life that conjure a deep understanding of this fact. When a… 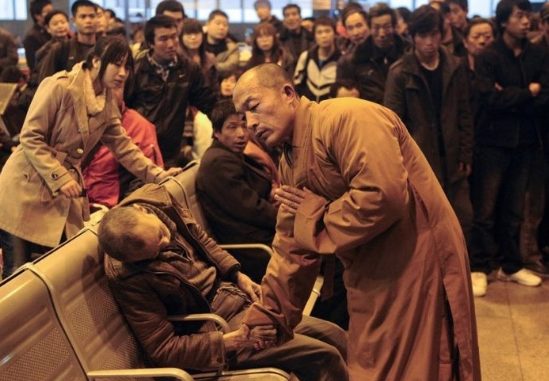 We’ve known that our lives are but a fleeting expression of the Infinite, but there are few instances in life that conjure a deep understanding of this fact.

When a monk found an old man slumped over on a train station bench recently, he stopped and prayed, and then bowed before him. He honored this man, who died of natural causes while waiting for a train, poignantly showing us so many truths, that if we were to just sit and focus on the pictures that were taken, we might be drawn to shed tears of awe and realization.

We could cry in joy that we have another day left to wait for whatever it is we want – and wherever we want to go. We have another moment to achieve our goals, or to visit someone we love.

We could shed a tear for the ephemeral nature of this physical reality, realizing that we place far too much pressure on ourselves to be young, beautiful, smart, successful (etc.). When our time comes, it comes. What have we done to make this journey a more heart-rending, or meaningful one? 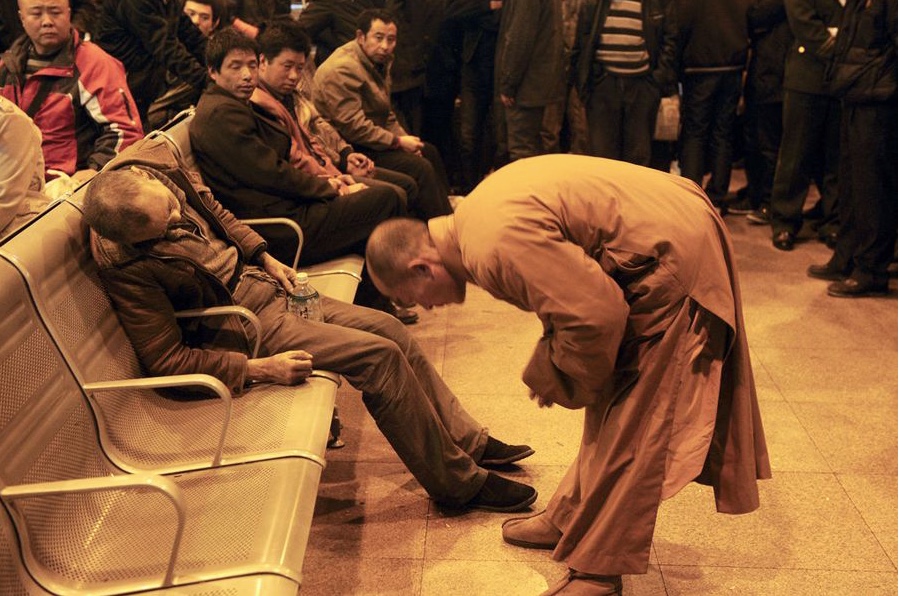 After giving “last rites” to the dead man, the monk bowed, and dissapeared into the crowd.

The photographer who took the pictures said about the incident,

“I remember clearly that it was about 5 p.m. on November 25. I was just finishing an assignment photographing retired military soldiers bidding farewell to their comrades at the train station. On my way out, I heard someone yelling from a corner and soon after lots of people gathered around. I ran towards the sound and made my way to the front of the crowd, only to find an old man dead on the bench. As I raised my camera, a Buddhist monk walked out of the crowd and went directly towards the dead man. The monk bent down to hold the old man’s hand and started to chant scriptures. I began to take pictures immediately. One minute later, police came over and cordoned off the area. After the monk finished the ceremony, he bowed to the old man and quickly disappeared among the other busy passengers.”

The monk appears and then disappears just as our transitory lives do. He blesses the cycle of life and death and then simply moves on. 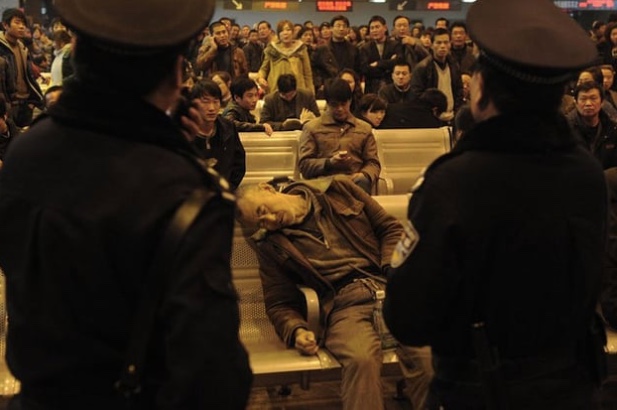 Police came to cordon off the area after the monk disappeared.

To Buddhists, death is not the end of life, though. It is merely the end of the body that we inhabit in this particular incarnation. We may take another form based on our habits and karma accumulated in this life.

Where we are born, to a Buddhist, is the result of our past and the accumulation of our positive and negative actions, and the resultant karma (cause and effect) of those actions.

Where will this man go on his next incarnate journey? Where will we go? By honoring the dead man on a train station bench, this monk blesses us all on our own trip through the Universe.

As Leonardo Da Vinci once wrote in his notebook; Just as a well spent day brings happy sleep, so a life well spent brings a happy death.

Perhaps this man manifested a monk to bless him at the train station as a sign of a “happy death.” May we all experience such luck as we live and die.

by The Mind Unleashed