In 1981, author Ken Keyes popularized a concept which had been introduced a little earlier by biologist Lyall Watson. The “Hundredth Monkey” effect postulated that, when enough monkeys – or people… 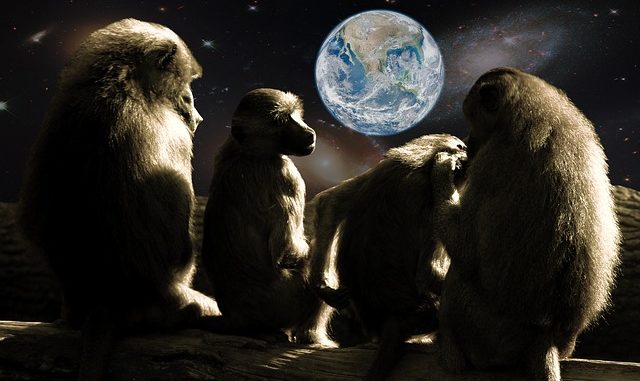 In 1981, author Ken Keyes popularized a concept which had been introduced a little earlier by biologist Lyall Watson. The “Hundredth Monkey” effect postulated that, when enough monkeys – or people – catch on to a better way of doing things, then the idea suddenly spreads into the awareness of many others.

The most remarkable aspect of this concept is that no physical contact or proximity is required for a new idea to travel from one group of people to another.

The story began when Japanese primatologists, who were studying Macaque monkeys in the wild in the 1950s, stumbled upon a surprising phenomenon.

On the island of Koshima, scientists were providing monkeys with sweet potatoes dropped in the sand. The monkeys liked the taste of the raw sweet potatoes, but they found the dirt unpleasant.

A young female monkey found she could solve the problem by washing the potatoes in a nearby stream. She taught this trick to her mother. Her playmates also learned this new way and they taught their mothers too.

Gradually, between 1952 and 1958, all the young monkeys and some of the adults learned to wash the sandy sweet potatoes to make them more palatable.

Then, suddenly in the autumn of 1958, a certain number of Koshima monkeys were washing sweet potatoes.

That’s when it happened! That day, almost everyone in the tribe was washing sweet potatoes before eating them. The added energy of this “hundredth” monkey surmounted the tipping point.

Then, we get to the really interesting part. The habit of washing sweet potatoes then jumped over the sea!

Colonies of monkeys on other islands and the mainland troop of monkeys at Takasakiyama began washing their sweet potatoes.

Although the exact number may vary, this Hundredth Monkey phenomenon means that when only a limited number of people know of a new way, it may remain the conscious property of these people.

But, there is a point at which if only one more person tunes into a new awareness, a field is strengthened so that this awareness is picked up by almost everyone.

The mechanism for this transference of ideas works the same way for monkeys as it does for all sentient beings. We exist within a global atmosphere of consciousness – a mind belt.

The human brain is constantly receiving and transmitting mental pictures and information to and from that mental atmosphere in which we are immersed.

The mind belt, otherwise known as Jung’s collective unconscious, does not cease to function because a few skeptics don’t like its effects.

It functions just like it always has, passing information from one individual to another based upon their common frequency of consciousness.

Given enough mental support, a new concept telepathically jumps to other groups via the mind belt.

When enough people have gone through their personal version of The Shift to the new consciousness, then a critical mass will form and suddenly everyone will become aware of the New Reality and its heart-centered values.

That is the day when heart-centered values will become the focus of everyday thinking for the vast majority of people.

That is the day when humanity will begin to look back on what has changed and realize that a massive shift has occurred, one that will be simply referred to as The Shift.

You can speed up the day when the big “Hundredth Monkey” effect takes place and, in the meantime, you can make your life – and the world – a more peaceful and fulfilling place by practicing the Love and Light technique.